Edward K. Rice, an innovator in concrete and building technologies who led major civil engineering firms and was an ardent supporter of the UCLA Samueli School of Engineering, passed away on May 8, 2020, in his Los Angeles home. He was 94 years old.

“Since the early 1950s, Ed had been a wonderful friend and an active supporter of our students and faculty,” said Jayathi Murthy, Ronald and Valerie Sugar Dean of the School of Engineering.  “He led an exemplary career as an engineer, inventor, entrepreneur and philanthropist. He was a towering figure in our engineering community and he will be greatly missed.”

Rice attended UC Berkeley in the early 1940s, but interrupted his studies during World War II to join the Army Air Corps, and flew as a navigator on a B-24. After the war, he returned to UC Berkeley to earn both bachelor’s and master’s degrees in civil engineering, in 1949 and 1951, respectively.

In 1952, he co-founded T.Y. Lin and Associates, an engineering consulting firm specializing in pre-stressed concrete, a form of concrete with a longer lifespan and added load-bearing strength. He was president of the firm for 17 years. 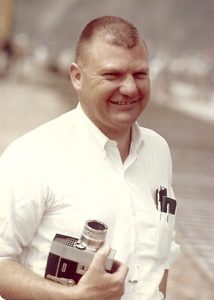 In 1975, he founded CTS Cement Manufacturing Corp., a leading specialty cement company whose products include a rapid-hardening cement that has been used on hundreds of miles of highways in California and at many airports across the country. Rice sold the company to his employees in 2016 and remained its honorary chairman.

Rice’s connection to UCLA began in 1951, when he became a lecturer for three years in what was then known as the College of Engineering. It was during those years, working under the school’s founding dean L.M.K. Boelter, whom Rice admired, that a decades-long relationship with UCLA Samueli got its start.

Rice would later serve as an adjunct professor of materials science and engineering from 1986 to 1990. Rice also served on the Dean’s Executive Board since 1990. For many years, he and his wife Linda were major donors to the engineering school, funding undergraduate scholarships, graduate student fellowships and providing research support to faculty who work in innovative building materials.

In 2002, the couple endowed the school’s annual Outstanding Student Awards, which recognize UCLA Samueli’s top bachelor’s, master’s and doctoral degree recipients each year. That same year, Rice was honored with the school’s Service Award in recognition of his 50 years of service to the school. In 2013, he received the UCLA Engineering Lifetime Contribution Award. Rice was also a major supporter of his own alma mater and in 1987, he was named a UC Berkeley Distinguished Engineering Alumnus.

Rice held 27 patents in cement and concrete technologies. He invented single-strand post-tensioning system, in which a steel cable, inserted after concrete has been cast, acts as a tendon to enhance strength in structures such as buildings, freeways, bridges and parking garages. The technique is now well-known and used globally.

Rice’s interest in urban development also put him at the forefront of major development projects, including the Los Angeles World Trade Center and Sacramento’s Downtown Plaza.

“Ed was one of the world’s most brilliant minds on how to apply innovative cement chemistry to the structural engineering of concrete structures,” said Eric Bescher, an adjunct professor of materials science at UCLA who leads research that Rice supported for more than 20 years. “His legacy will live on through the structures he built and many new ones to come through his vision for better building materials.”

Rice’s innovative work on cement and concrete earned multiple industry awards. In 2013, he received an Honorary Membership in the ASTM (formerly known as the American Society for Testing and Materials) Committee C1 on Cement. He was a Fellow of the American Society of Civil Engineers and of the American Concrete Institute. In addition, Rice was inducted into the Post Tensioning Institute Hall of Fame in 2005.

In 2018, Rice was named an Honorary Member of the American Concrete Institute, the organization’s highest honor, “for outstanding lifelong contributions in the advancement of concrete and cement technology and particularly shrinkage-compensating cements.”

Rice is survived by his wife Linda, his daughters Peggy, Katy, and Libbie; his stepson James; stepdaughter Christine and four grandchildren.